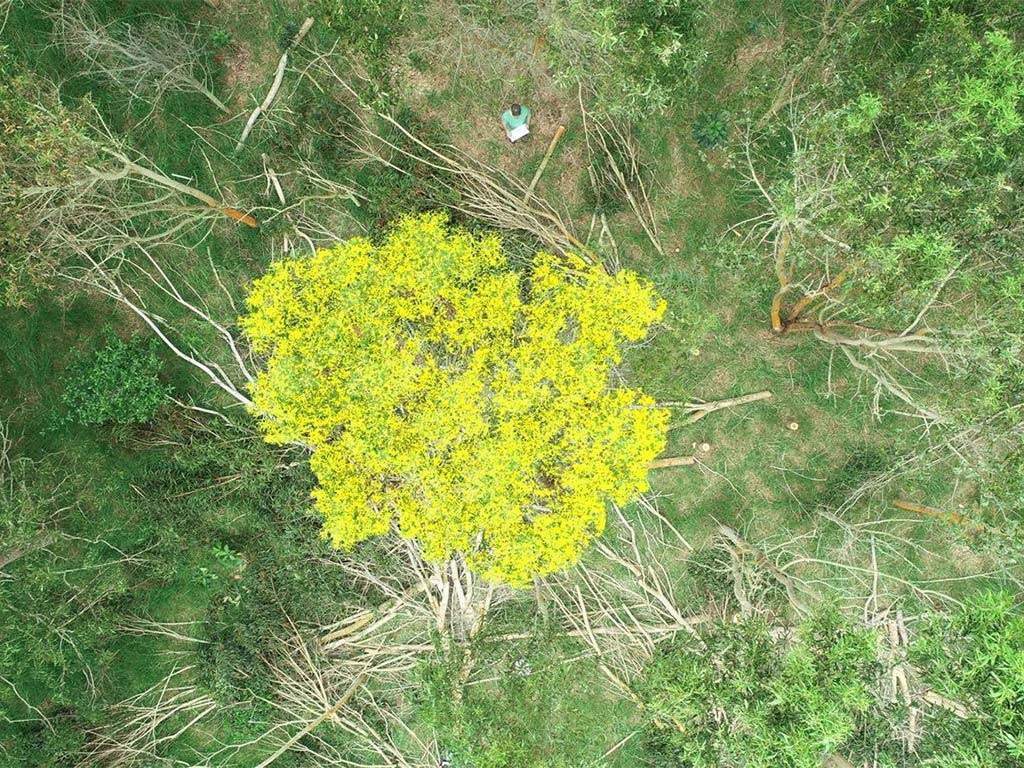 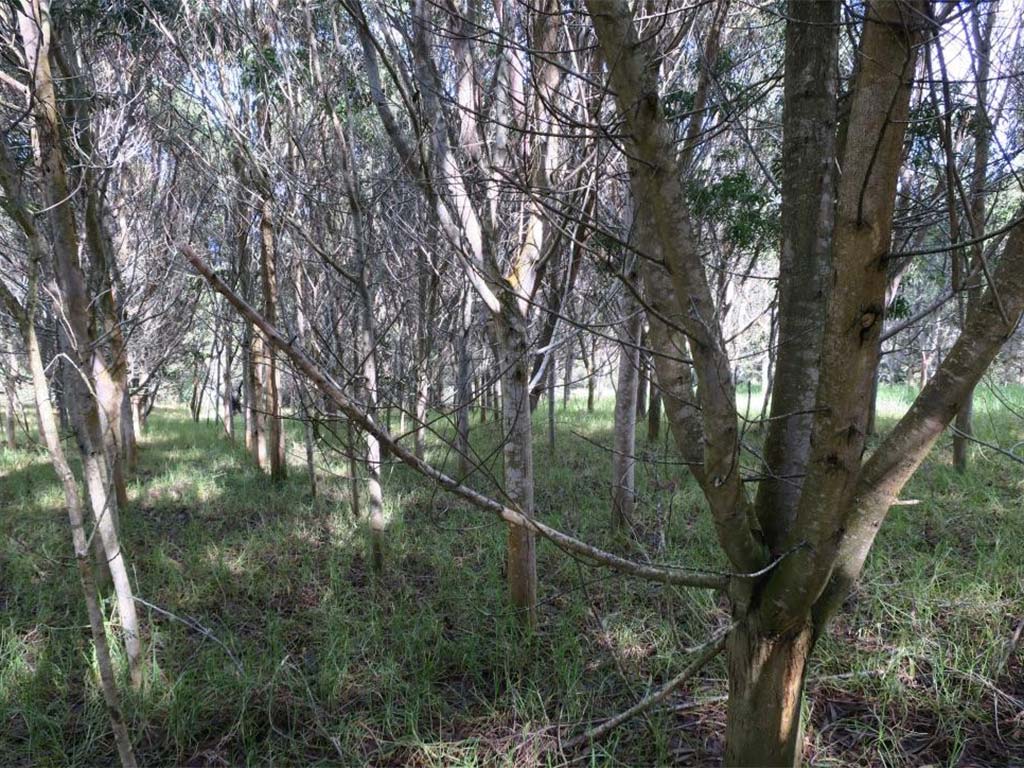 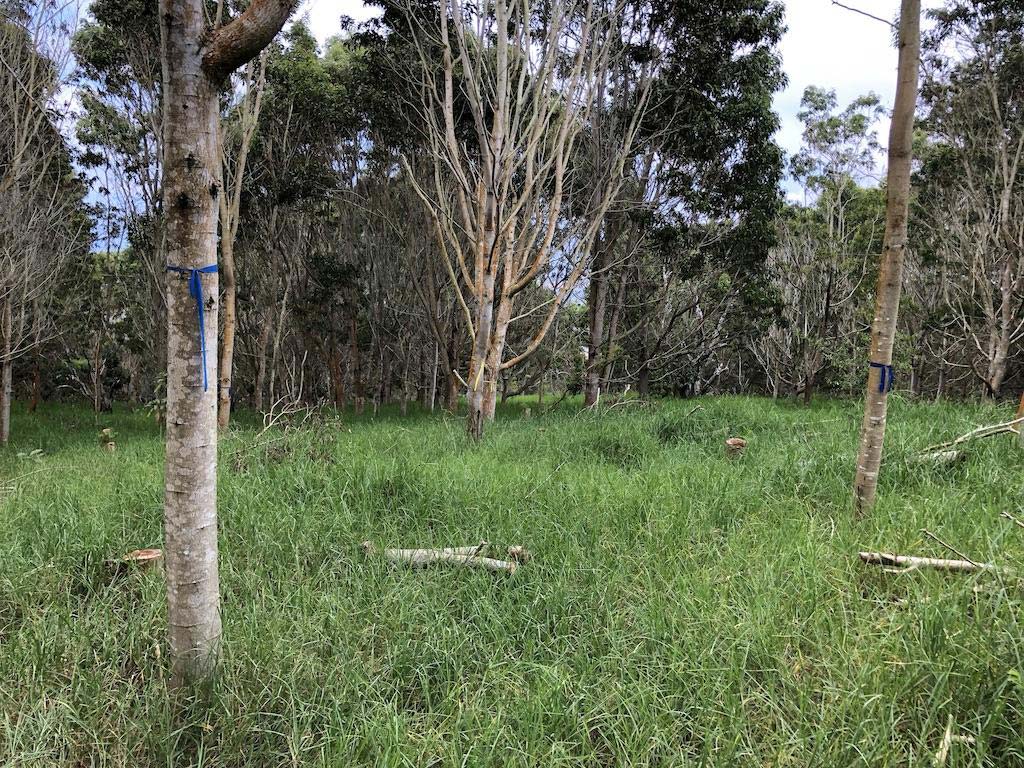 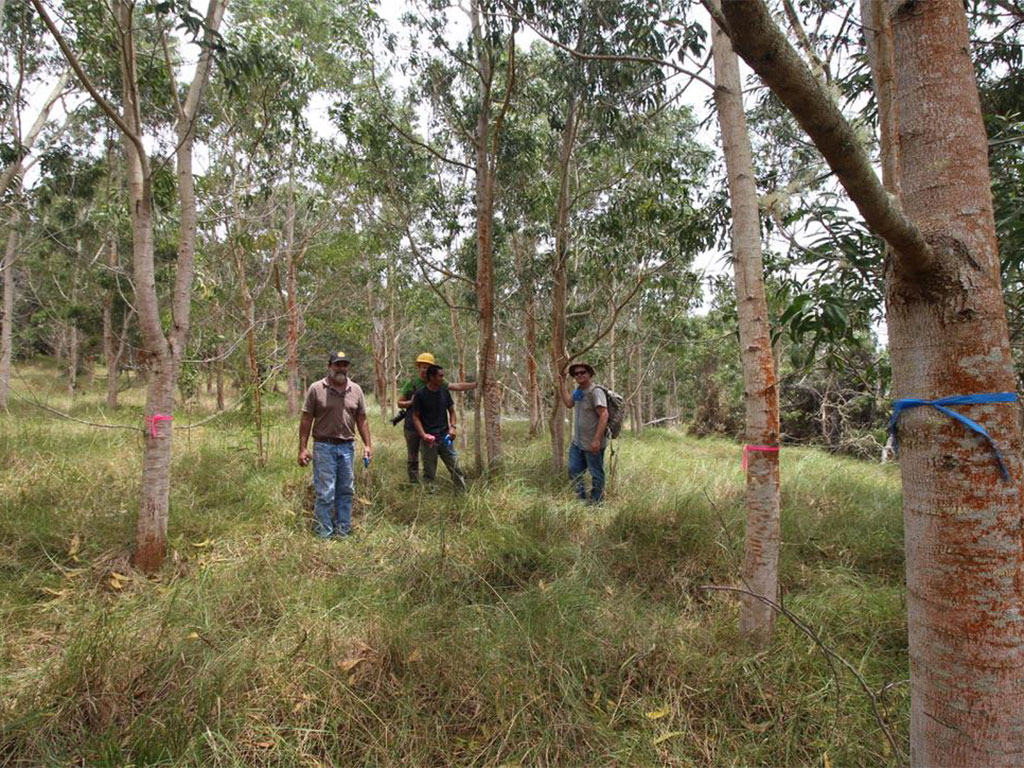 Koa (Acacia koa A. Gray) is among the most ecologically and economically valuable hardwood tree species in Hawai‘i and is planted extensively for forest restoration. A relatively high planting density helps to ensure sufficient numbers of surviving seedlings. High density plantings also encourage rapid development of a closed canopy forest to suppress invasive grass and promote recruitment of other native species. Koa grows fast, however, and many restoration plantings receive little to no follow-up management. A similar scenario occurs when koa regenerates naturally after harvesting or seed scarification; prolific regeneration often leads to high density stands that stagnate during the stem exclusion stage of development. An important management practice in young koa stands is density reduction (thinning), which alleviates inter-tree competition that reduces tree growth and canopy development, promotes seed production, and reduces susceptibility of trees to insect and disease problems. Because koa often has inherently poor stem form (Scowcroft et al. 2010), thinning also provides an opportunity to select individual trees with good form when a management goal is timber production. Thinning is equally important, however, to promote koa stand development for conservation or wildlife habitat.

Past research has demonstrated the importance of thinning of young koa stands and provided guidelines for management (Scowcroft et al. 2007; Idol et al. 2017). Our objective in this project is to continue to advance this line of research, while also establishing demonstration trials and conducting extension activities to educate managers and landowners on thinning practices.

In 2006, 360 Acacia koa seedlings were outplanted on the Pu‘u Wa‘awa‘a cinder cone at the Hawai‘i Experimental Tropical Forest the island of Hawai’i. These seedlings were originally part of a nursery fertilization and stock size experiment that resulted in significant differences in seedling performance early in the outplanting phase. Both the use of fertilization and larger stock sizes improved seedling growth on this site. The stand was planted at a relatively high density (2 m x 2 m) and by year 10, the trees showed strong inter-tree competition and crowded canopy development.

In May of 2018, a thinning prescription was implemented based on two basic tree categories. One focused on releasing those dominant individuals with desirable commercial characteristics (i.e., straight form and large diameter). The other emphasized development of bird habitat (i.e., multi-stemmed, multi-branches, and large diameter/crown). A total of 14 trees per group were measured for a range of characteristics that included diameter, height, and crown area (measured via drone photos). These trees will be measured through time to determine thinning responses relative to two control trees from each group that were not released.

This project will provide important information on response of planted trees to thinning treatments and serve as a demonstrate site to share the value of thinning treatments with restoration project managers and the public. We also expect to see significantly more seed production in these stands once the canopies are released, and so the plots will subsequently serve as an efficient seed source for collections of locally adapted koa seed for restoration at Pu‘u Wa’awa’a. Finally, reducing the koa canopy will allow more opportunities to underplant other native species.