Can control of acacia psyllids reduce the formation of multiple stems on koa saplings? 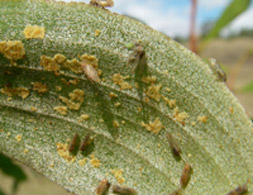 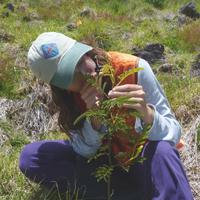 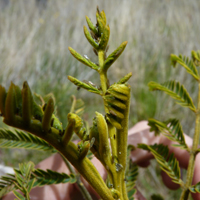 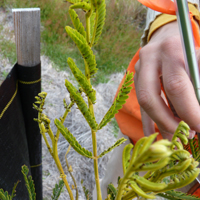 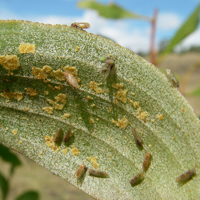 Traditionally, when Hawaiian woodworkers saw an elepaio, a native insect-eating bird, pecking on a koa tree, they deemed it unsuitable for canoe building because the tree was probably infested with insects [wehewehe.org]. Today, there are few koa trees with large single-stemmed trunks that can be used to build traditional canoes. Most planted koa trees fork near the base, forming multiple stems that cannot be used for canoe making.

There are many factors that may contribute to forking in koa trees, including planting density, genetics, and insect damage. Foresters in Hawaii have observed that young koa trees that are heavily-infested with acacia psyllids (Acizzia uncatoids) often sustain damage to the main growing tip, leading to multiple stems and eventually to a forked tree. Controlling acacia psyllids during the first few years after planting koa seedlings has been shown to increase growth rates. However, the effect of psyllid control on forking had not been measured. We hope to discover whether controlling acacia psyllids can reduce the amount of forking in koa seedlings. If so, this may be a silvicultural solution for growing single-stemmed trees that could someday be made into traditional canoes.

The acacia psyllid was accidently introduced to the Hawaiian Islands in 1966 (Leeper & Beardsley, 1973). This invasive insect spread throughout the islands, and were first spotted on Hawaii Island in 1970. Acacia psyllids feed on new growth of koa, potentially leading to loss of apical dominance and the formation of multiple leaders (forking).

We have established randomized, replicated trials to scientifically test whether controlling acacia psyllids reduces koa forking. Specifically, we are measuring the differences in psyllid density and koa forking among treated and untreated 1-2 year old koa seedlings planted in Spring 2013 by the Mauna Kea Watershed Alliance at Kanakaleonui Bird Corridor on the east slope of Mauna Kea. These seedlings were planted as part of a major reforestation effort to establish migration corridors for native birds. We are working closely with foresters in Forest Solutions, Inc. to determine the safest and most effective treatment method.

Bimonthly, we record the density of acacia psyllid eggs, nymphs, and adults on experimental plants. We also measure the total plant height, number of leaders, and estimate the leaf area of true leaves and phyllodes. Preliminary results show that our treatment was effective in reducing psyllid density. We'll post further results as we collect additional data.

Leeper, J. R., and J. W. Beardsley. 1973. The bioecology of Psylla uncatoides in the Hawaii Volcanoes National Park and the Acacia koasanctuary. University of Hawaii Technical Report No. 23.