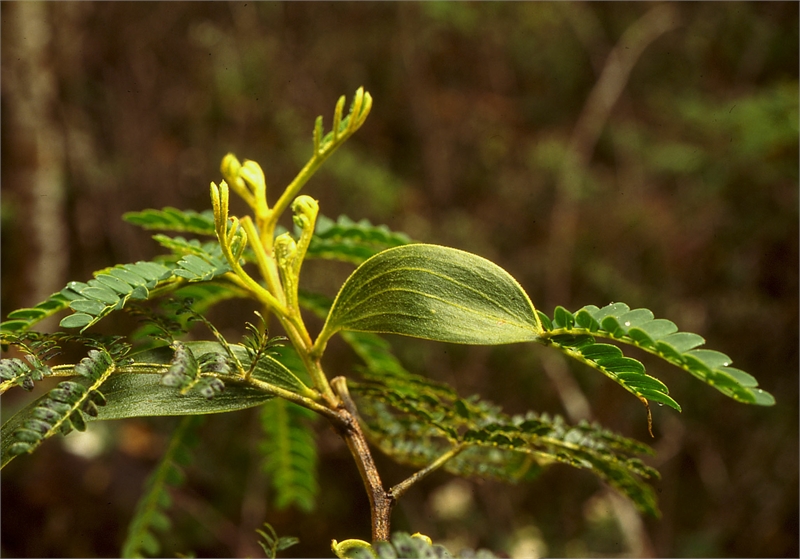 Acacia koa, like many acacias, produces two different kinds of leaves: bipinately-compound true leaves and modified petioles, called phyllodes. The true leaves are found on juvenile plants and usually transition to phyllodes during the first year of growth. The structure and physiology of true leaves are thought to provide an advantage for fast early growth and light capture in shaded conditions, whereas phyllodes are structured to provide greater drought resistance.

Koa occupies a dominant canopy position in forests with rainfall ranging from 800 to 6000 mm per year. In each forest type, regenerating koa seedlings face distinct challenges, including both shade and drought. However, most previous studies on the differences between true leaves and phyllodes have examined only single populations. In our study, we are exploring how the timing of the transition from true leaves to phyllodes differs among koa populations from contrasting forest types under various levels of shade and water stress. We also wanted to know whether a delay in the transition to phyllodes was correlated with other shade avoidance responses, such as decreased branching and longer internode lengths. These traits are desirable for timber production, especially for koa which is notorious for its proclivity to produce low branches when grown in open conditions.

Decreased branching in lower light, even if accompanied by a small decrease in growth rates, would suggest that it might be beneficial to plant koa seedlings under nurse trees or in mixed species plantations. These planting strategies have been applied in the production of timber-quality blackwood (Acacia melanoxylon), another phyllodinous acacia species.

The current study is being conducted in the Horticulture and Landscape Architecture Greenhouses at Purdue University. We are using two populations of koa: one from a wet forest and another from a dry forest on Hawaii Island. Seedlings from these forests are grown under three light levels: full sun, 70% full sun, and 30% full sun. These treatments include decreasing red to far red ratios to mimic canopy effects. The lowest light level is coupled with a shade cloth treatment that has low light intensity, but a red to far red ratio indistinct from full sun. Within each light treatment, plants were either watered daily or when they reached a set soil water content level. After four months, the plants are beginning to transition from true leaves to phyllodes. As expected, plants from the dry forest population and those grown in full sun are transitioning faster. We await further results that may shine light on the relative adaptability of these two populations of koa to environmental changes. The results of this experiment will have implications for improved management of koa in plantations and restoration.